Would you like some quick tips for using the Coastal Atlas Map?

The area we know as the Puget Sound Basin was once covered by a mile-high glacier. During the last ice age, 15,000 to 20,000 years ago, water flowing under the ice carved out deep north-south troughs.

These troughs filled with water as temperatures rose, creating the fjord-like passages that surround the islands and peninsulas of Puget Sound.

The waterfront bluffs, rocky shores, broad river deltas, and sand-and-gravel beaches we enjoy today were all left behind by the melting glacier. 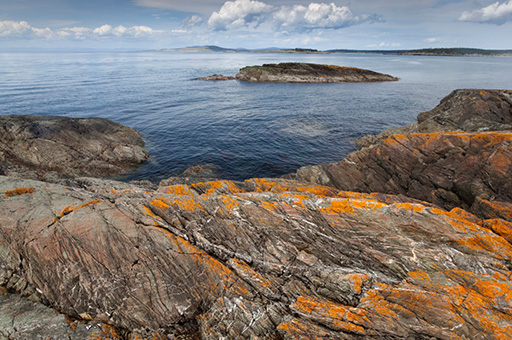 Effects from the glacial carving can still be seen today.

Water and wind keep the coastline dynamic, moving sand and sediment from bluffs to nearby beaches. People have also made significant changes to the topography in some areas.

About 25% of Puget Sound’s 2,500 miles of shoreline is now lined with bulkheads, seawalls, and other protective “hard armor.” Some of it is on public land and in commercial developments—such as next to railroad tracks and roads—but much of it is on residential property.

What many waterfront homeowners don’t realize is that most residential properties along Puget Sound shores are not in high-erosion zones. Most have low to moderate erosion risk, with the specific characteristics of each property contributing to its erosion patterns.

Hard armor not only buries part of the beach, but it worsens erosion on nearby beaches and harms the delicate ecological balance that ensures the survival of salmon, shellfish, and other native species.

Watch the animation below to learn about the effects of hard armor on salmon. (Or watch it on Vimeo instead.) 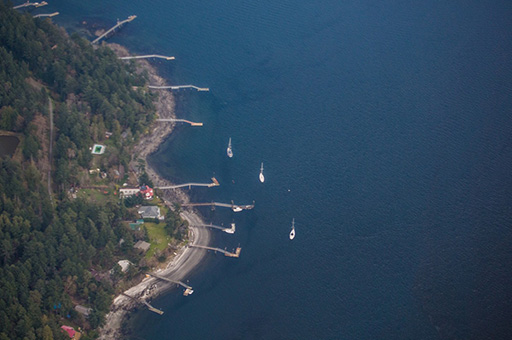 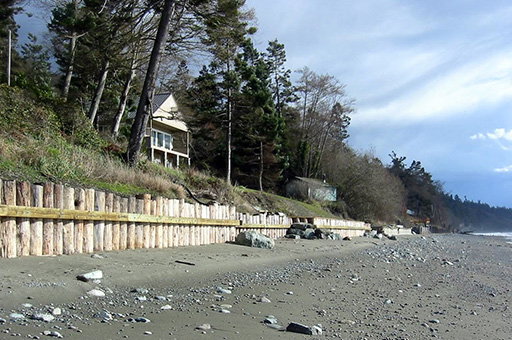 Bulkheads and seawalls displace vegetation and marine habitat, and lead to the coarsening of all nearby beaches,

More than 25% of the Puget Sound shoreline has bulkheads or other “hard armor” instead of a natural waterfront.

Your beach is made of sand and gravel from rivers or from other beaches or bluffs. A drift cell is a segment of coastline with one or more sources of sediment, usually including a bluff, that supplies the nearby beaches. Wind and waves cause a cyclical replenishing of beaches, helped along by rainwater that flows over the surface and into the ground and by seasonal freezing and thawing.

The process is often gradual. Some sites can have minimal erosion and then experience a dramatic event such as a landslide during a wet winter. Nevertheless, overall erosion rates are low along Puget Sound. 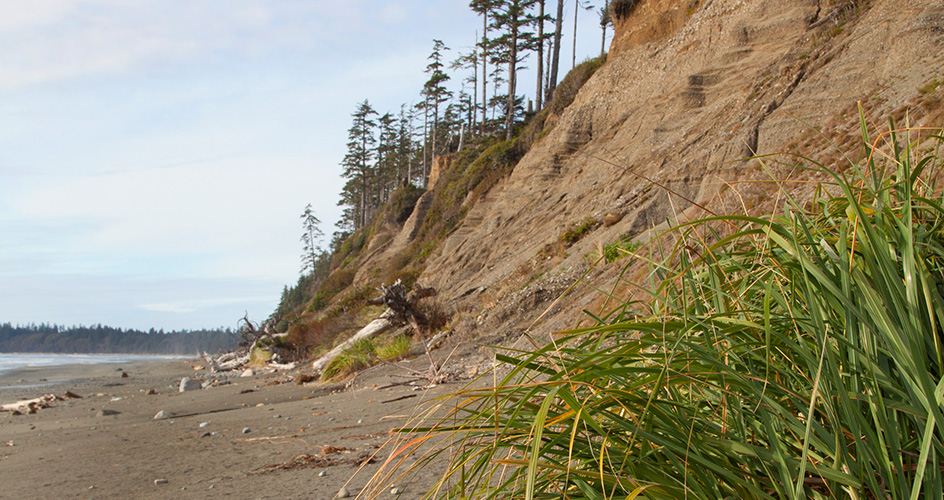 Bluffs are vital to replenishing beaches with sand and sediment.

Bluffs are especially vital to replenishing beaches with material—which is why some of these naturally eroding landforms are known as “feeder bluffs.”

Little by little–or sometimes in a big chunk–bluffs break down and deposit rich glacial sediment onto the beach below.

In the Puget Sound area, feeder bluffs range in height from a few feet to more than 300 feet. As sea levels rise due to climate change, naturally-eroding bluffs will help build up higher beaches.

Drift cells can overlap, but the eroding material usually stays within a discrete zone. Puget Sound has more than 800 drift cells; you can get information about yours by consulting the Washington State Coastal Atlas.

When waves hit the shore at an oblique angle, they can move the sediment along in one direction. Some of the sediment is carried into deeper water, and the rest is deposited on a beach, sand spit, or point. 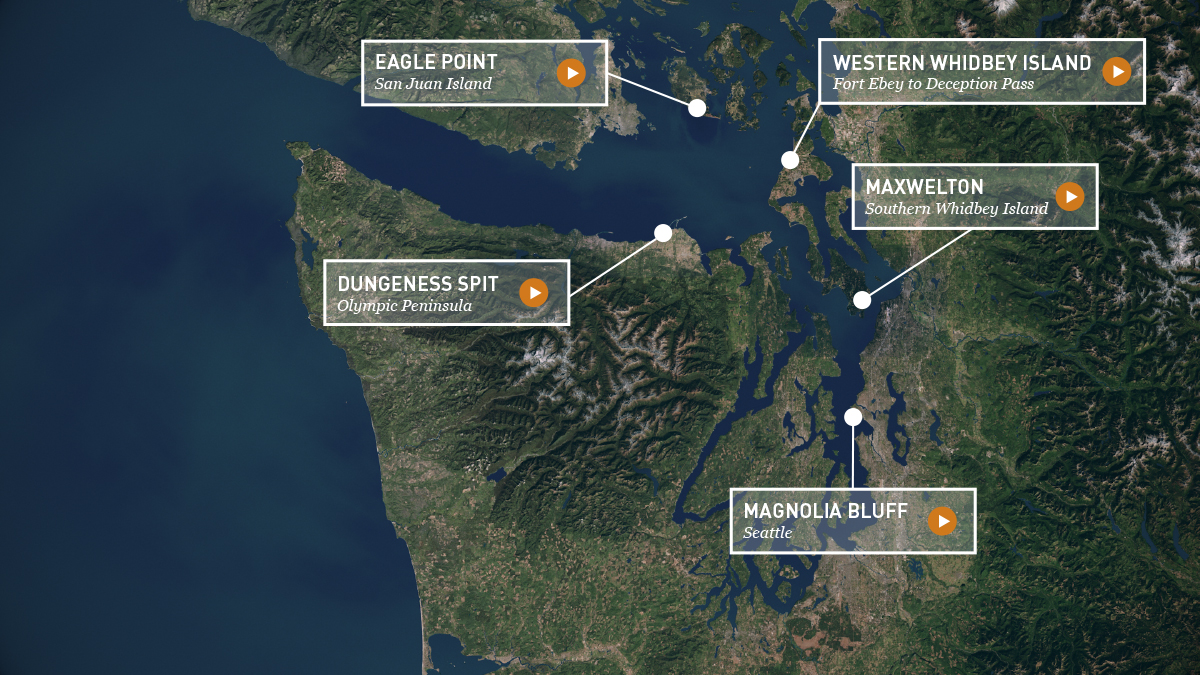 The constantly replenished beaches—and the estuaries, lagoons, and marshes behind them—provide valuable habitat for marine life, shorebirds, and insects. In shallow waters shaded by vegetation, smelt and herring feed on plankton and spawn among eelgrass and kelp. Young salmon feed on these smaller fish, as do shorebirds that nest in nearby trees. Oysters grow in shallow bays and estuaries, filtering toxins from the water and forming reefs that shelter crabs and other shellfish. Insects that are food for fish, birds, and other wildlife live in drift logs and other organic beach debris. 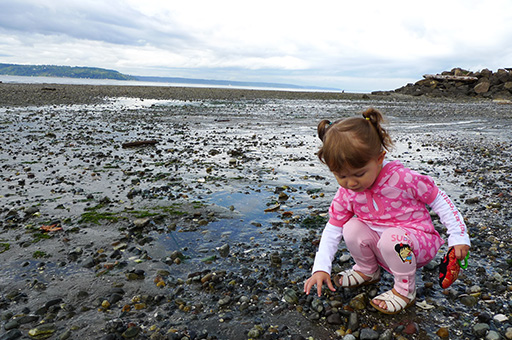 The tide flats of Puget Sound are populated by an abundance of creatures.

Bulkheads harm the delicate ecological balance that ensures the survival of salmon, shellfish, and other native species.

AN ECOSYSTEM AT RISK

Natural beaches are critical to the biodiversity of Puget Sound. Physical modifications to the beach disrupt the delicate ecological balance. Bulkheads and seawalls not only displace vegetation and marine habitat, but they lead to the coarsening of all nearby beaches, making them less hospitable to species that depend on fine sediment for feeding and spawning. The entire food web is disrupted, reducing ecological diversity. 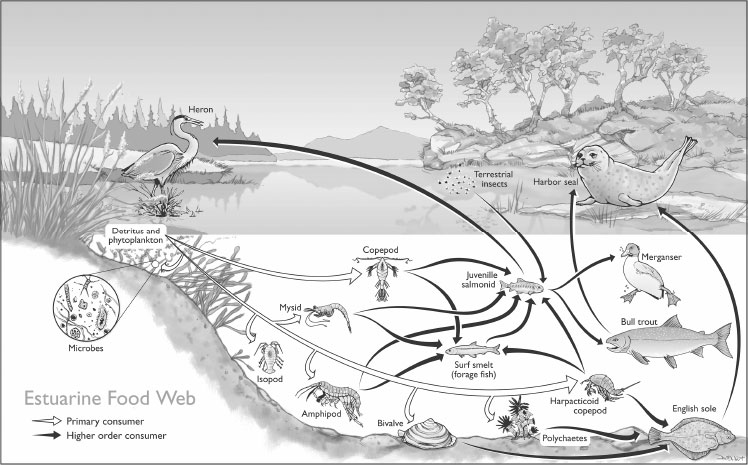 The impact is worst when bulkheads are built below the high-tide line. Among the most damaging effects is the loss of the shallow corridor that young salmon need to migrate to the open ocean.

As a waterfront property owner, you are the steward of your own special piece of Puget Sound. By replacing an unneeded bulkhead with more natural erosion protection—or leaving your shoreline in its natural state—you can help ensure the survival of our native fish and wildlife. In doing so, you will also be showing your neighbors that protecting your property and Puget Sound is feasible, affordable, and a smart investment in the future. 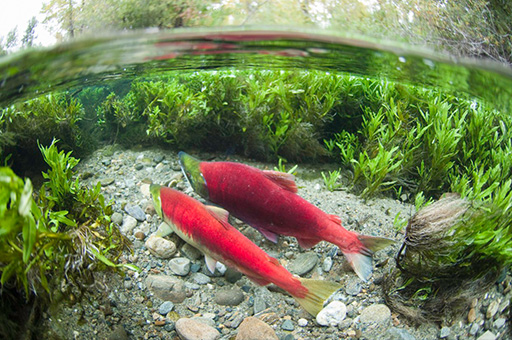 Some salmon populations in Puget Sound have declined by as much as 90% since the 1960s. 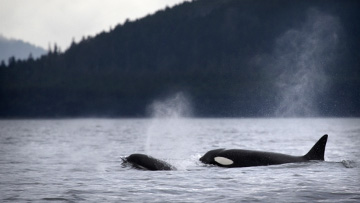 The orca population in Puget Sound has declined dramatically in recent decades—to fewer than 100—but conservation efforts could contribute to their recovery.